Although not a true kelp (ie from the Laminaria family) this wispy, wild and long seaweed, identified by  its flexible, tensile mid-rib will nestle up alongside the Oarweed in the sublittoral beds, sometimes even becoming more dominant in areas lashed by windy seas. It can withstand the force, although it is rare not to find that its frond has been torn and fringes eroded by tidal movement.

Dabberlocks has been on the menu in Scotland, Ireland, Iceland, Denmark and the Faroe Islands for centuries, and was sold in the markets of Edinburgh, hanging from shoulder mounted frames, up until the 19th century. Containing protein, sugar, vitamins, minerals and trace elements, and a good amount of alginic acid, the ‘wings’ (lamina on either side of the mid-rib) are considered a delicacy whilst the mid-rib itself was given to children as a sweet crunchy snack on northern and western islands such as Tiree and Unst.  In Orkney the fronds at the base of Dabberlocks were a treat known as ‘murkles’ and served as a savoury fried in butter. 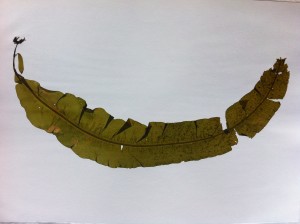