Tang and ware are the traditional Scottish names used to describe seaweed, particularly that gathered or harvested for use in agriculture and industry.

Tang grows upon the Rocks above the Low-water Mark,

Early records show that the season we know of as Spring, was often called Ware (variants include vear, ver, vire, voir, were, waar and waur) and was traditionally the time when seaweed was cast up by a ‘ware-sea’. From the first of January on huge amounts of seaweed were gathered and laid on the land as a fertiliser. Notes in old statistical accounts of farming activities show that ‘by the first of February all the doon land would have been wared ‘(Orkney, 1911) and that ‘in the Spring season, after the oats are sown, the farmer gives the wared land one ploughing, which they call their fallow’ (Orkney, 1795). Individual farmers and estates laid claim to beaches as their own for the collection of seaweed, and many towns have a Ware Road testifying to this activity.

Seaweed also played an important part of diet both for people and animals, being full of essential proteins, minerals and vitamins and available and accessible during the ‘lean’ months of the year.  Wonderful recipes exist for making puddings, sauces, soups and stews and seaweed was also given to livestock to supplement their diet and as a therapeutic aid for sore muscles and tendons. Seaweed was also used in various forms to make shampoos, soaps and salves, as dusting for cheeses, in distilling, and burnt to release the alkalines necessary for glass manufacture. It was the key source of iodine for many decades, and of income for many Highlanders and Islanders.

Near my own home in North Berwick, we are awash with seaweed for most of the year. The Firth of Forth opens to the sea just a mile up the coast and the protective nature of the inlet allows a huge variety of seaweeds to flourish away from the more destructive forces of the North Sea.  Around the bend, along the coast by Dunbar and down to Eyemouth, where inlets are more exposed (Seacliff, Tyninghame, St Abbs) there are fewer specimens readily seen. For me a walk along the beach gives a sense of being at the world’s edge; the very point of transition from the world I know to one I don’t.

Stretching from highest water mark to lowest sea ebb, there is only this mercurial tide line in which this world can be glimpsed, clinging to the rocks, pools and shallows of the shore. Here the forests of rubbery kelps, clumps of leathered wracks, coils of mermaids’ hair, and tangles of red and green algae open a window to world waiting to be explored. This website is my point of departure- in it I follow the tide lines across the seasons in search of the tang and ware of this beautiful coastline.

*from Session papers, Earl of Morton v. Covingtree, 9 July 1759, Orkney.  Source of all quotes: Dictionary of the Scots Language, http://www.dsl.ac.uk/ 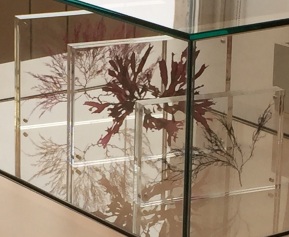 I was delighted to be asked to exhibit my seaweeds at the St Abbs Visitor Centre over the summer season from March to October this year.  The first installation has gone in, with some larger pieces to follow in coming months

Perched on the edge of the cliffs overlooking the ancient harbour, the centre holds a commanding view of St Abbs Head and the jagged coastline that delineates the edge of the National Nature Reserve.  This reserve, stretching as far as the eye can see is home and sanctuary to 100’s of species of birds, sea and shore life.  It has witnessed an astonishing repopulation of seabed species due to a prohibition on trawler fishing and has gained an international reputation for superb diving.

On the high bluff just outside the centre stands a beautiful memorial to the women and children survivors of the Eyemouth Disaster of 1890.  Created by sculptress Jill Watson, it keens the loss of life, love and livelihood scoured into the sea on that fateful day.