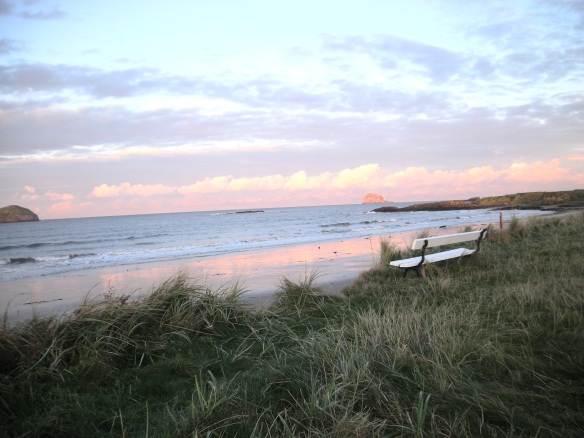 Walking down to the beach the other evening, I found the tide at its lowest ebb, the sands drawn smooth by the ocean’s pull, and an ethereal glow infusing water’s edge to grassy shore. Opaque hues of iridescent blue and ribbons of red and gold fanned across the shimmering panorama/canvas. Funnels of light poured through the backlit clouds, illuminating and shifting  colours, pushing and pulling shadows and shades to dance across the expanse. Yellow lichened rocks sparkled in the warming light and the Bass glowed luminous across the white-licked waves.  The lapping tide arrested its movement and a golden peace descended; all breath expelled into gossamer air  –  the sea, the sky and the earth resting for a moment to let the tide turn. 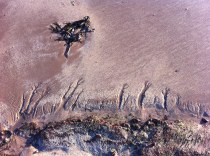 Returning from the shore, I watched the trickles of tidewater heading home, carving tracery fingers into the soft sandy banks and fringes of pools to leave transitory motifs of their passing. Sometimes these look like silhouettes of ancient forests; hills lined with gnarled trees,  limbs and branches stretching into rivulets of sand. Sometimes like the stream beds of dry deserts, pummeled, molded and then swept away  by the wind.

The sands, newly washed clean, started to shift with life again. Wiggles of worm casings spiraled up across the wettest shores, tiny flies emerged from crusted pockets of sand, and the dunes released sprays of summer swallows in hot pursuit. The sandpipers resumed their tide line inspections and the gulls called out cacophonously for a final hunt.