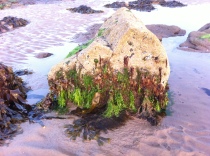 Ulva latuca, commonly known as “sea lettuce” grows in gentle profusion at the mid-littoral zone of our northern shores where it can find protected, tide pools, crevices or low-lying rocky outcrops to gain a holdfast protected from the force of tidal surges, but not too far from sunlight. Ulva will settle in quite well with its cousin Laver (Porphyra umbilicalis) – who is much more prolific in its range and spread – and are happy to populate the lower parts of rocky stretches that are home to a variety of wracks (Fucus vesiculosus, F. serratus and F. spiralis). They will live quite happily cheek by jowl with the Enteromorphas (Gutweed), hiding in their long strands along the water’s edge. 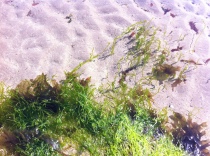 A brilliant bright green, translucent in water, a bed of Ulva latuca will resemble waving leaves of young lettuce underwater but are rather gooey when on dry land.  Highly nutritious (full of natural protein, potassium, magnesium, iron, iodine, zinc and vitamins) they have been used for centuries to augment the diet of poorer coastal dwellers, particularly in the ‘lean’ months between Feb and May, and are still one of nature’s  natural “rescue remedies”; growing rapidly in the Spring and providing a wealth of essential micronutrients (Omega 3 fatty acids too) that we all lack in northern climes. Sea lettuce can be eaten raw or lightly cooked (unlike Laver which needs a protracted period of boiling) by steaming or frying, and is often dried and then crumbled onto salads. 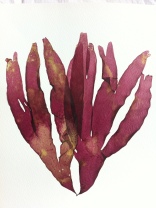 Dulse – although decidedly not green, Dulse (Palmaria palmata) is an ancient foodstuff of the Northern British Isles and a staple ingredient in many traditional Scots and Irish dishes. Today it is sold in health food shops, neatly chopped and dried to be tossed onto salads, vegetables, or mixed into stews.  Highly nutritious, and tasting vaguely of Marmite, it is an excellent, potent source of vitamins, minerals and iron and historically recommended to those suffering from nutritional deficiencies or recovering from illness. I was delighted to see it being used as an alternative to salt in a pizza dough recipe for healthy school eating programmes. 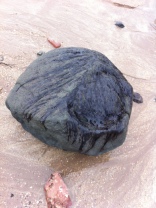 Laver – The Welsh equivalent, Laver bread is still made and consumed in coastal and mining communities along the shores of Wales.  Washed, chopped, boiled and moulded into ‘cakes’ it is then traditionally fried and served at  breakfast as accompaniment to bacon and eggs. Not surprisingly, it has a very high vitamin D content that helps to mitigate against long hours spent underground with no or low exposure to the sun’s rays, in addition to being a plentiful source of protein, as well as vitamins B, B2, A and C.  Japanese, Korean and Chinese cuisines use Laver (Porphyra yezoensis), known as nori or gim, to wrap sushi in, and to flavour soups and stews, drawing on the huge coastal sea farms for their harvests of both it, Ulva prolifera  and Sugar kelp.

Kelp  – The huge stalks of Laminaria that range across the lowest strands of the tidal zones have long been used by harvesters and farmers to augment meagre diets and incomes.  Kelp has been harvested to extract agar (used for centuries as a gelling agent) – formerly harvested off the shores of Scotland, but now harvested for that purpose in Japan and Iceland. Today kelp is still sold in capsule form to help combat obesity – an ancient diet pill. It is kelp that is used to create the gold standard of luxurious skin cream, Crème de la Mer, developed by creator Dr Max Huber who saw Pacific Coast fishermen applying it to sunburn.  I understand that it is also used in Burn Units of A&E hospitals, where it is laid directly onto affected skin, just underneath bandaging, to promote healing of scarred and burnt tissue. 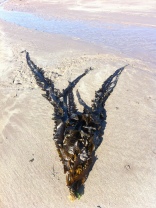 Sugar kelp (Saccharina latissima) and “Long feathers” (Alaria esculenta) were traditionally collected from the shores of the Firth of Forth and sold in Edinburgh by merchants in street markets. These two seaweeds are still cultivated and harvested by coastal communities and served as a regular staple in diets of China, Iceland and even parts of Maine and Connecticut.

More recently, scientists at the University of Birmingham have been using seaweed in tandem with other natural products to create gel-like ingredients that make you feel fuller, longer – molecular gastronomy.

It makes me wonder that so many easily accessible sources of vitamins, minerals and health promoting substances are so little known by today’s populations.  What a bounty we have at our shores just beyond the reach of dry land!